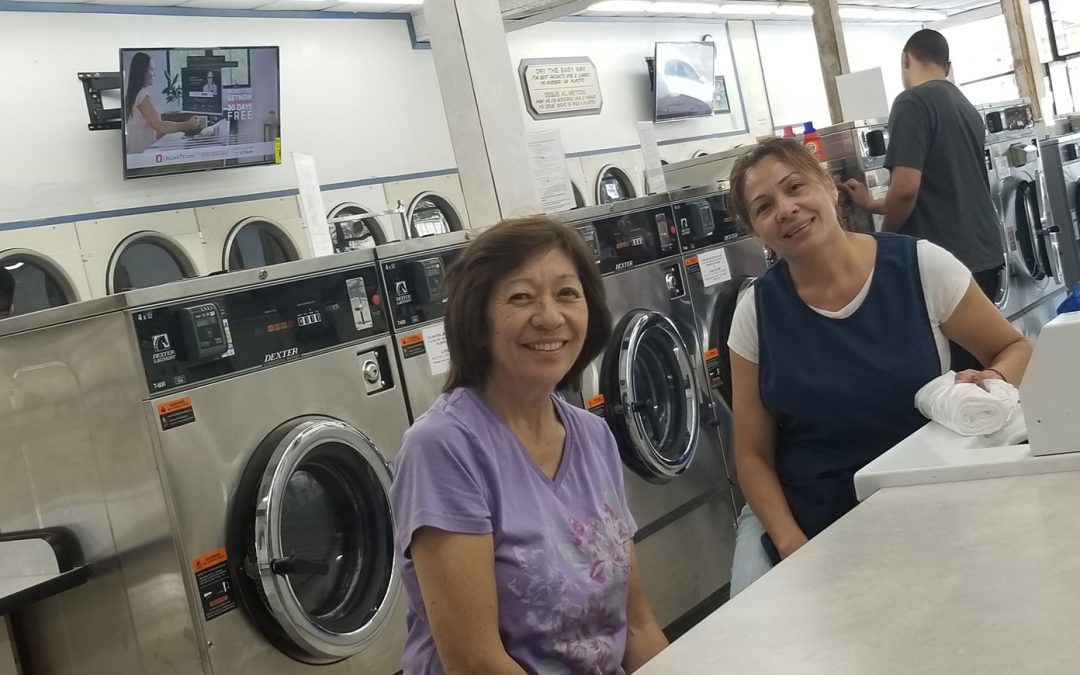 Long-established, family owned and operated, Clean Coin Launderland, in the Silver Lake neighborhood of Los Angeles, is in the final stages of being remodeled and upgraded to better serve the needs of the changing, local resident population. Named the top ‘Hippest Hipster Neighborhood in America’ by Forbes Magazine in 2012, the demographics of Silver Lake have changed dramatically since the laundromat was acquired by the current co-owner’s parents in 1978. Gentrification has brought demand for businesses that cater to a younger, more upscale crowd.

Working with Michael Ambrose, Laundry Specialist at Western State Design, owners, Richard and Helen Nakawatase, have made a significant investment in new, state-of-the-art Dexter Laundry equipment. The gleaming, new, stainless steel Dexter commercial washers allow busy customers to do their laundry in much less time than using older machines. And, the machines use less water and energy in the process which cuts down on the high cost of utilities.

The Nakawatases added a high-tech payment system, SpyderWash, to all of their new washers and some of their older washers, as well, as over half their dryers, which accepts all forms of payment, including credit/debit/loyalty cards in addition to coin. This is important in this day and age where millennials and the generations that follow no longer carry cash. 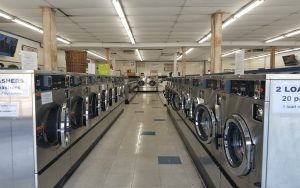 Clean Coin Launderland is one of the larger coin-operated laundries in Los Angeles; it was THE largest capacity laundromat in Los Angeles—featuring 150 washers and dryers—when Helen’s parents bought it in the late 70’s. Her parents, who immigrated to the U.S. from mainland China, considered investing in a variety of different businesses before they settled on the laundromat, which was a success, from the very beginning.

Located at the corner of Hyperion and Rowena, the laundromat is well situated in a small, strip shopping center in between a 7-11 and a T-Mobile, with other popular retail destinations nearby, and plenty of parking.

Helen and Richard bought the business from Helen’s parents in 1986. Helen has been running it ever since, with Richard doing the books while continuing to work at his day job as a wealth advisor and CFP®, until he retired last year.

Shortly after acquiring the business, for a period of about 16 years, the busy couple got help from Richard’s retired parents. His parents not only worked at the store during the week, but they also took care of Helen and Richard’s children on weekends, freeing up Helen and Richard to look after the laundromat.

Fast forward about 15 years to the present: Helen says she’s had enough. The store is open 5:45 am until after 11 pm at night (last wash is 10 pm). In spite of the fact that they currently employ three to four attendants, it still requires a lot of Helen’s time and attention, especially if/when the attendants don’t show up for work.

The Nakawatases live 32 miles away from the store, which wouldn’t be an unmanageable distance anywhere other than Los Angeles with its legendary traffic. A drive that should take 30 minutes, usually takes an hour-and-a-half. That’s three hours of commuting each way, on top of work!

In recent years, Richard and Helen considered selling the business, and even thought about closing it in 2016 when it came time to renew their lease. Their expenses were increasing while revenues remained flat. Between rising sewer fees, and other operating expenses, the Nakawatases worried they couldn’t make ends meet. But they didn’t want to leave their loyal customers in the lurch.

A solution finally presented itself in the form of a successor: their son, Derek. Though they had asked him repeatedly, over the years, if he wanted to take over the business, he always said no because he was busy pursuing other career interests. But, eventually, he realized he could do both. He’s very familiar with the business, of course, since he and his sister grew up helping their parents run the store.

With gentrification happening all around them, and Derek’s future in mind, the Nakawatases realized they needed to make some major improvements to their 40-year-old store, starting with their aged laundry equipment. In addition, they started looking into offering value-added services, such as Fluff and Fold, that would attract more business, which led them to a laundry consultant, Beverly Blank. Beverly assisted the Nakawatases with analyzing local competition and developing a strategy that fit their business operations.

WSD distributes Dexter Laundry vended equipment, not the competitive brand originally installed in the Nakawatases’ store. Though the Dexter equipment comes at a premium, Helen and Richard concluded, through much independent research, that it’s well worth it, given its build quality and durability. In addition, they like Dexter’s Emergency Stop button, particularly since they can’t get to the store quickly in case of an emergency.

The Nakawatases purchased 30 new Dexter commercial washers in a variety of sizes to replace many of their existing top loaders. Here’s a complete list of the equipment furnished by WSD: 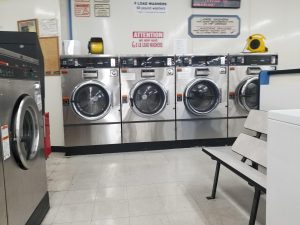 Though they have 10 fewer total laundry machines than they had before (140 vs.150), they actually have more capacity than ever, thanks to their new Dexter high capacity washers. That has freed up space for a Fluff and Fold service. For now, though, they’re taking each step at a time.

“We have had to adjust our brains to the new model of laundromat,” explained Richard. “Clean, bright, and safe are no longer enough—customers expect more, these days.” he continued.

Derek is slowly taking on more responsibility for Clean Coin Launderland’s operations, while continuing at his day job as an assistant golf professional and part-time professional magician. In the meantime, Helen and Richard continue to work at the store part-time, overseeing the renovations and attending to their customers’ needs.

Speaking of customers, Helen and Richard are emphatic in their belief that superior customer service is at the crux of a successful commercial laundry.

“In order to have repeat business, you have to treat your customers well,” Richard exclaimed. “We follow the old adage that the customer is always right; we don’t get in petty squabbles with them,” he continued. “It’s very simple: you don’t have a business without customers, so you need to take care of them,” he concluded.

The Nakawatase’s approach to customer service may explain why, in the 40 years Clean Coin Launderland has been in business, many area competitors have come and gone but none have their staying power and connection to the local community.

Speaking of community, a tragedy occurred recently at a nearby Trader Joe’s whereby a gunman took a number of people hostage, killing one person and injuring others. Fortunately, the store’s weekend attendant got out swiftly and safely as the tense situation unfolded. But since the store’s door locks are controlled by timer, the store remained unlocked, allowing witnesses and emergency service workers to use it as a shelter. Helen and Richard wish they could have done even more to help.

So, this well-run, family business endures as the neighborhood and the world at large changes around it. We have confidence that it will continue for at least another 40 years, though we hope Helen gets to retire to a nice, tropical island somewhere—she deserves it.