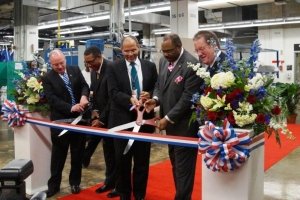 Working with our partners at R.W. Martin, the remodeling of the Textile Care Processing Facility at the Richmond VA Medical Center was recently completed and a ribbon cutting ceremony was held on March 13, 2014.  This state-of-the-art steamless laundry is the first of its kind installed for a federal government operated laundry facility. WSD designed the laundry with machines from an array of manufacturers that pride themselves on employing US veterans and building quality American made equipment.

Several years ago the government consolidated operations to cut costs and improve efficiency of laundry facilities resulting in the Richmond VA Medical Center laundry processing millions of pounds of laundry each year from their own facility as well as several other hospitals and military installations. In a continued effort to conserve resources while improving productivity the new equipment cleans more laundry in less time resulting in lower utility and water usage. Consideration was also given to the employees and creating a safer environment with ergonomically designed equipment that reduces the impact of laundry processing tasks that require a repetitive motion.

The VA Quality Assurance team members, Bruce Jensen and Anthony Tura, who oversee all federal government laundry facility projects, were present for the ribbon cutting ceremony and they lauded the project. Jensen commented, “We went from the stone age to the 21st century, “ and Tura concurred, “It’s just amazing to see how far the systems have advanced.” The new equipment automates much of the production work.

The new equipment and process is as follows:

Laundry exchange carts are unloaded from the delivery trucks and the soiled linen is weighed and then sorted into weigh carts.

An E-Tech soiled overhead semi-automatic monorail conveyor system loads one of five overhead storage monorails. The monorail automatically delivers soiled linen to the Milnor 6-module, 150 lb capacity Continuous Batch Washer (CBW).  This CBW has PulseFlow technology which has reduced the water consumption from 2.5 gallons per pound to 0.38 gallons per pound of laundry processed. 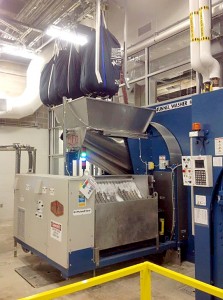 The CBW system includes a Milnor single-stage 56-bar press/extractor and four 300 lb Milnor system dryers which automatically discharge onto a belt conveyor.   The conveyor then loads a Gardner sling cart. The slings are then elevated to the work station rails on the clean side of the laundry.  Additionally, two Milnor 600 lb. washer-extractors are matched with one 600 lb. Consolidated natural gas dryer. 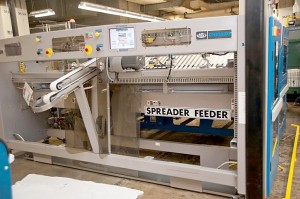 For questions about the project or to discuss your own laundry facility needs contact a laundry specialist today.