There’s Something Fishy about this Las Vegas Coin Laundry

In a legendary city like Las Vegas where fantastic sights and spectacles are the norm, coming up with new ideas to attract attention to your small business can be a challenge. For Leise and Bruce Gilliat, owners of a 6-store chain of local laundromats, called Las Vegas Coin Laundry, the opportunity came floating in via the folks who star in the Animal Planet reality TV show TANKED™. They came up with the unusual idea to turn one of Las Vegas Laundry’s Dexter coin operated stackable washer dryer units into a live aquarium and document it in one of their upcoming TV episodes. 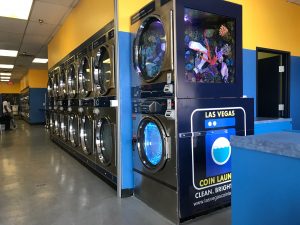 If you’re not familiar with the show, TANKED™, here’s a brief synopsis: Entrepreneurs-turned-TV-stars, Wayde King and Brett Raymer, the founder and C.O.O., respectively, of Acrylic Tank Manufacturing (ATM) in Las Vegas, specialize in creating and installing distinctive and often outlandish custom aquariums for a variety of clients around the world. Each episode focuses on some of their most unusual and challenging projects and features a parade of exotic fish.

As long-time fish aficionados, the Gilliats previously commissioned ATM to install custom aquariums in their home and were featured in the series pilot in 2011. But, according to Bruce Gilliat, it never occurred to him to install an aquarium in his commercial laundry equipment. But he agreed that it would attract attention—and hopefully additional business—to his E. Charleston Blvd. 24-hour coin laundry. 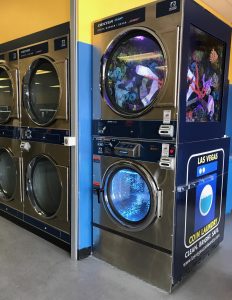 “My biggest concern was that I had enough on my plate with six coin laundry stores to run, and wasn’t sure I could take on the responsibility of taking care of additional fish, on top of everything else!” he exclaimed.

Working through his commercial laundry equipment distributor specialist, Scott Harrington, at Western State Design, Gilliat contacted Dexter Laundry who provided him with the Stack Washer-Dryer unit. The team at ATM removed the guts of the coin op washer-dryer and turned it into an aquarium. The actual aquarium is in the upper part of the unit in place of the dryer, with the sides cut out for optimum viewing. The lower part, where the washer normally is, contains the life support system for the aquarium, hidden by a bubbler so all that can be seen from the outside are bubbles.

“Installing an aquarium in a coin laundry is a challenging proposition,” said Gilliat. “Aquariums require partial water changes on an ongoing basis, but we couldn’t have pumps and hoses running across the floor of the store with kids and laundry carts everywhere,” he continued. “We discussed this with ATM and came up with a user friendly water change system that resides in the back room, increasing the enjoyment factor for visitors,” he explained. 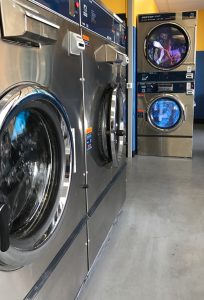 As with all of their laundromats, the E. Charleston Blvd. store has an attendant on duty most of the time. However, the installation includes a security gate that lowers over the tank to keep the public a safe distance when the attendant is not present, while still keeping the aquarium visible.

The inhabitants of the aquarium are saltwater fish including Heniochus (schooling bannerfish), some Raccoon Butterfly Fish, a Pinktail Trigger as well as other species.

“We will continue to play with the mix of fish to make sure we have the right group of fish that get along with each other since they are on display 24 hours/day,” said Gilliat.

“We believe this aquarium is a great point of interest for kids as well as adults and helps pass the time quickly,” said Gilliat. “Of course, we have free Wi-Fi, multiple TVs, vending machines, and other amenities but having the aquarium on display will make visiting our store to do the laundry a little bit more fun,” he continued. “We hope to “net” some new customers now that this project is “fin”-ished,” he quipped.

One of a six-store chain of laundromats located throughout the greater Las Vegas area, Store #5 is located at 1748 E. Charleston Blvd., a short drive from the Las Vegas strip. It is open 24/7 365 days/year and features a host of modern amenities including state-of-the art Dexter Laundry coin operated washers and dryers. And now it has a really cool aquarium. Additional information is available at http://www.lasvegascoinlaundry.com.