In June 2010, Sam Bae moved from Thailand to the U.S., settling in a north Los Angeles community in sunny southern California. Five months later, he opened his first laundromat in nearby Eagle Rock, a densely populated neighborhood consisting mostly of renters. Bae credits his wife, Laddawan, with the idea of entering the retail laundry business, though he agreed with her at the time—especially after conducting extensive research.They reasoned it would be a smart, enduring business idea because everyone needs clean laundry.

That laundry venture proved to be such a success, Bae recently decided to develop a second laundromat. He spent several months looking for available space in just the right location. He eventually found an old laundromat in a busy neighborhood in Northridge, not far from the California State University Northridge (CSUN) campus, but it required extensive renovation. After rebuilding—by Bae’s estimate—90% of the laundromat, it’s open for business and off to a great start.

The new store—called Sam Laundromat—beckons customers with its appealing storefront and bright, clean, and spacious interior. Neighborhood customers who had been loyal to the old business, but abandoned it in exasperation as it deteriorated, have started to return in increasing numbers, drawn by the beautiful new facilities. 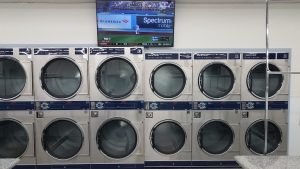 The star attraction of the new space is the gleaming, new, high efficiency Dexter Laundry commercial washers and dryers that replaced all the old, barely-functional laundry equipment. Bae chose Dexter Laundry machines based on what he learned with his first laundromat. Dexter machines are known not only for their efficiency, but also for their reliability and durability over the long run. Customers love how easy they are to use. In choosing Dexter, Bae knew he was making a solid investment.

Bae enlisted the help of Michael Ambrose, a laundry expert with Western State Design, his local Dexter commercial laundry distributor, to help him decide on the optimum Dexter equipment mix for his 3,200 square foot laundromat. Bae says Ambrose was a really helpful resource: he was easy to work with and really knew his stuff based on his many years of experience helping commercial laundry operators achieve success. 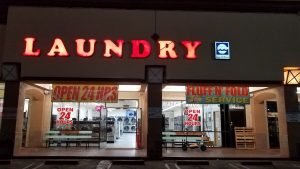 In addition to new, state-of-the-art commercial laundry equipment, Bae installed and updated other amenities to attract customers, including Wi-Fi, flat screen TV, a water dispenser, and a play area for kids. One of the laundromat’s distinguishing characteristics is its spacious, open feeling; customers aren’t tripping over each other. It also has plenty of folding tables, laundry carts, and seating. It’s a very easy and comfortable place to spend an hour or so doing laundry.

A big reason for Bae’s success is that he’s uber-focused on serving customers’ needs. In addition to providing a comfortable space with amenities customers love, he keeps the laundromat open 24 hours, with attendants on duty for most of that time.

Bae’s latest laundromat project was not without its challenges. As mentioned above, he had to rebuild much of the facility including installation of a new water heater along with a modern HVAC system. He also had to address some sewer issues. However, that’s all in the past; he’s anticipating smooth sailing, going forward.

Sam Laundromat is at 8363 Reseda Blvd in Northridge, California and is open 24 hours. If you happen to be in the area, check it out! To learn more about Western State Design’s laundry equipment and services, please contact one of our laundry experts. 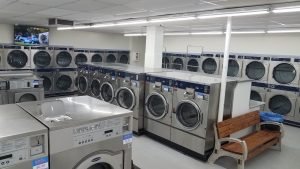 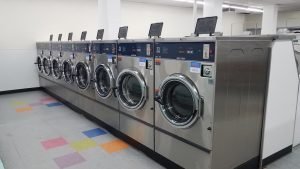 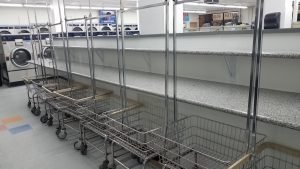 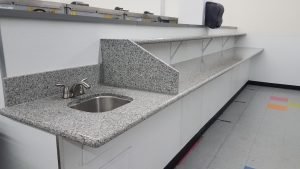