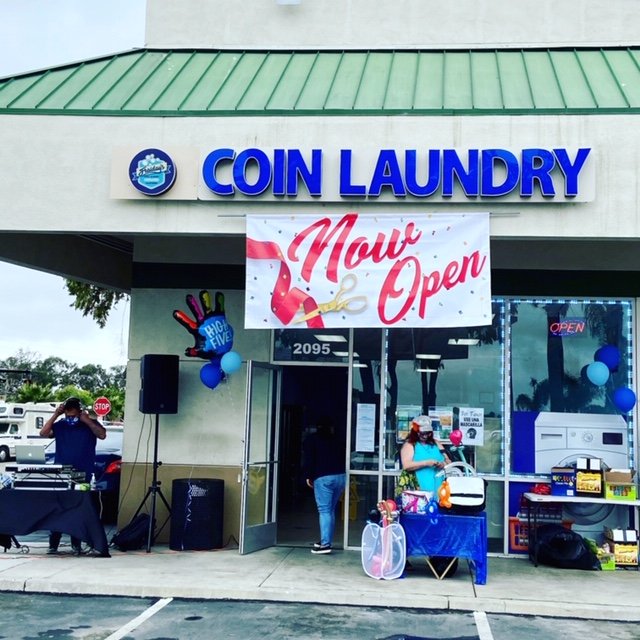 Western State Design’s client Edgar Fraire just opened an 1800 square foot laundromat in Oxnard, CA, working with WSD Laundry Specialist, Michael Ambrose.  Like so many of our other vended laundry clients, Fraire chose the laundry business because it would allow him to make money on the side while he continued to work in his main profession.

Fraire has a successful career as a peace and law enforcement officer working for a probation agency in the state of California. He loves his work and appreciates that it has allowed him to augment his income by working a lot of overtime. Now, however, with a new wife and baby on the way, Fraire decided that he needed the flexibility to spend more time with his family. He is hoping that he can replace his overtime pay with income from the laundromat, working closer to home.

Why Invest in a Coin Laundry?

When asked why he chose the laundromat business, Fraire explained that the idea came from his father.

“My dad used to say, ‘if you ever open your own business, choose an essential business like a coin laundry,’” said Fraire. “That advice always stuck with me,” he continued

Having never operated a small business before, Fraire spent two years doing research and learning about the commercial laundry industry. He consulted with a lot of industry professionals, attended a number of educational seminars and read everything he could about it.

Dexter Laundry is the Gold Standard

Initially, he says the amount of information to consider was daunting. In particular he says he was overwhelmed by the huge number of laundry equipment choices to consider. As he spent more time researching his options, drilling down on specifications and first-hand reviews, it became clear that Dexter Laundry was the gold standard.

He spent his days off work researching laundromats and potential locations. He visited a number of existing stores and scoured real estate listings. He studied different neighborhoods, paying close attention to the demographics of each.

He eventually settled on his current location in Oxnard for a few key reasons: it’s a densely populated neighborhood which is home to a number of hardworking local farm and warehouse workers. In addition, the community is very active, engaging in a number of sports and other outdoor activities and celebrations which generate a lot of laundry.

He found an older laundromat that had been neglected and allowed to fall into a state of disrepair. Fraire described it as being in “really, really bad shape”. He spent four months renovating the space and figuring out how to best equip it.

Early in the process of figuring out how to retool his laundromat, Fraire made the acquaintance of WSD’s local laundry specialist, Michael Ambrose, through a referral from Dexter Financial Services (DFS). Fraire has nothing but the highest praise for both Ambrose as well the folks at DFS. He says they were both amazing to work with.

Fraire explained that Ambrose responded immediately upon being contacted and they met for several hours. Ambrose spent the time learning about his plans and educating him about the retail laundry industry. Fraire describes Ambrose as really nice, kind, patient, and never pushy. He explained that Ambrose was like a good teacher going over his homework with him. From the beginning and along the way, Ambrose earned his trust, which Fraire said is typically a high hurdle for a law enforcement professional like himself.

Ambrose worked with Fraire on deciding upon just the right Dexter equipment mix for the space:

As with many of us, the COVID-19 pandemic threw a wrench into Fraire’s plans, delaying his store opening by two months. Not only did the virus and resulting shutdown prevent his contractors from showing up for work, local government offices were closed so he couldn’t schedule inspections or obtain the permits necessary to open.

Fraire was finally able to open his doors in June and is happy to report that business is quickly picking up. Customers rave about the clean, new space and gleaming Dexter washers, dryers and other amenities. He says they particularly like the reversible dryers — which are great for big, bulky items like comforters. There are many returning customers and an increasing number of new customers every day.

When asked about unanticipated challenges or what he might have done differently if he were to do it all over again, Fraire has an interesting response:

“The process of opening the new business wasn’t that difficult, but it did present some challenges, because it was all new to me,” he said. “Initially, I focused on the big things like the equipment and how the space looked, but I figured out that I neglected some of the smaller details that make a difference to the overall customer experience,” he explained. “For example, I learned that I needed to have much bigger trash receptacles available for customers. Empty laundry detergent containers fill up a trash can quickly!” he exclaimed.  “Also, having a locked restroom accessible only via a key furnished upon request was frustrating for customers. I realized that installing a keypad and providing the code to customers was a much better experience for them,” he concluded.

Looking ahead, Fraire is optimistic about the future. He is fortunate to be able to rely on family members to help him manage the laundromat on a day-to-day basis, while he goes to work at his ‘day job’. There’s only one hour/day when the store is unattended which seems to be working well.

Fraire says he’s learned a lot, and next time will know exactly what to do. It sounds like a new laundromat empire might be in the making. Stay tuned.

To learn how Western State can help you open or grow your laundromat business, please contact one of our Laundry Specialists today.