An Entrepreneur’s Journey to the Laundromat Business 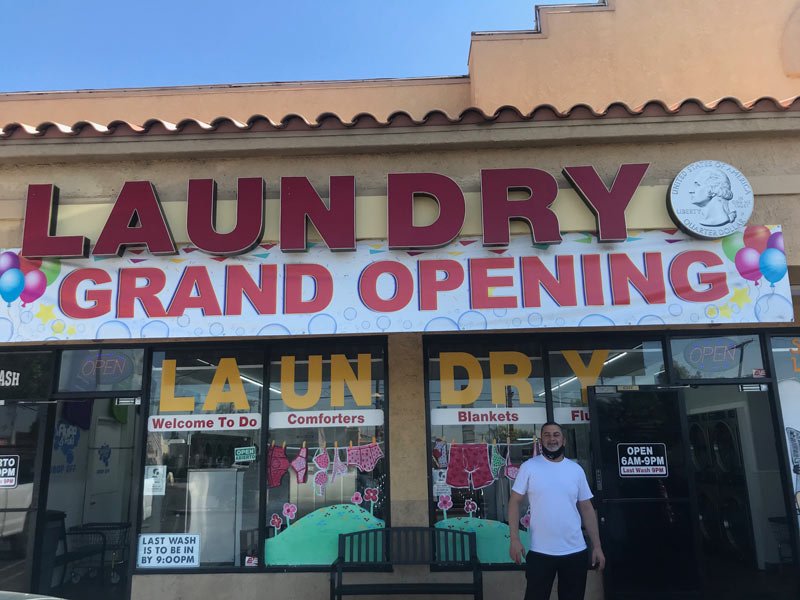 Eddie Qaqish entered the laundromat business after a long and successful career in the retail auto business, rising to General Sales Manager of a thriving Nissan dealership. He retired from the auto industry to turn his focus to building promising retail enterprises on his own.

His first retail venture was acquiring, remodeling, and re-opening a liquor store in a shopping center a few blocks from his home. His “Super Liquor” store has proven to be such a success that he soon plans to expand it and purchase the smoke shop next door.

A few years after acquiring the liquor store, Eddie jumped at the opportunity to take over the lease on an old, rundown laundromat in the same shopping center. The 2,200 square foot laundromat was more than 25 years old, had a hodgepodge of equipment, no service, and had not been upgraded for many years.

His plan was to run the laundromat ‘as is’, remodeling it in stages. First, he thought he would purchase some new Dexter Laundry commercial washers and dryers to replace the worst of his old laundry equipment, to tide him over for the short-term. He knew, from prior research, that Dexter Laundry machines were the gold standard for vended laundries in terms of durability, reliability, and user-friendliness. He also committed to spending as much time as possible at the store understanding that he could make his business stand out by providing top notch service to his customers.

As he operated the store prior to the partial remodel, he realized the value in acquiring more than just some equipment, and instead decided to install almost all new equipment.

A Better Plan: All New Dexter Equipment and Renovation

Within no time, customers started flocking to his store to use the new Dexter machines. Customers were attracted to the appealing, new stainless-steel machines and loved how they worked — especially how fast they were. They also expressed appreciation for the improved and personalized service. This early success prompted him to re-equip completely: he ordered additional Dexter washers and dryers to replace the last of the older equipment.

When all was said and done, in consultation with his trusted distributor’s Laundry Specialist, Steve Erlinger from Western State Design, Eddie installed the following mix of Dexter equipment:

Erlinger is a coin laundry industry veteran who has helped hundreds of laundromat owners achieve success. He knew, at the outset, from more than a decade of experience, that it made sense for Eddie to retool completely from the start. Over the years, he has witnessed more than a few operators waste time and money trying to limp by with old, decrepit equipment in a dark, dingy store. Erlinger has also long stressed the importance of laundromat customer service in order to stand out from the competition.

Eddie quickly realized the value of the new equipment as he spent time interacting with customers and began to understand what drove new business. In addition to boasting a full complement of modern, high efficiency Dexter commercial laundry equipment, Eddie realized he could attract even more customers by making his store a more appealing and welcoming space. He freshened up the exterior and the interior and added popular amenities (described below).

Having seen, firsthand, the value in providing his customers with exceptional customer service, Eddie hired full time attendants. He also started offering fluff and fold service, after learning best practices from a consultant. The fluff and fold business has taken off beautifully. He has three-sized bags the customers can fill with laundry to bring in to be washed, dried and folded: small ($20), medium ($30) and large ($40). Always the entrepreneur, Eddie offers these bags for sale and they have become a hot item

Business is booming and Eddie has yet to do any advertising outside of a big sign that says “Grand Opening”. He says that when he asks people how they heard about the store, they say it is because of the sign or word-of-mouth.

Eddie says, “I love the business as it’s much less stressful than selling cars, but more importantly, I enjoy meeting and getting to know the people and hearing how thankful they are for such a great store for the neighborhood. The more relaxed work schedule is also nice!” He added, “there are certain things an owner has to do well and pay attention to in the laundry business but it’s really not hard, you just have to be diligent and consistent.”

Asked if he had any regrets, Eddie responded “I wish I had bought more of the large capacity Dexter T-900 washers — customers love them!”

Super Wash Coin Laundry is open from 6 am until 9 pm, seven days a week. The store offers useful amenities such as plenty of free parking, free Wi-Fi and fully stocked soap and snack vending machines. And it’s very welcoming to families with children.

To learn how the experts at Western State Design can work with you to jumpstart your new or existing laundry business, please contact one of our Laundry Specialists today.