A Laundromat to Serve the ENTIRE Neighborhood 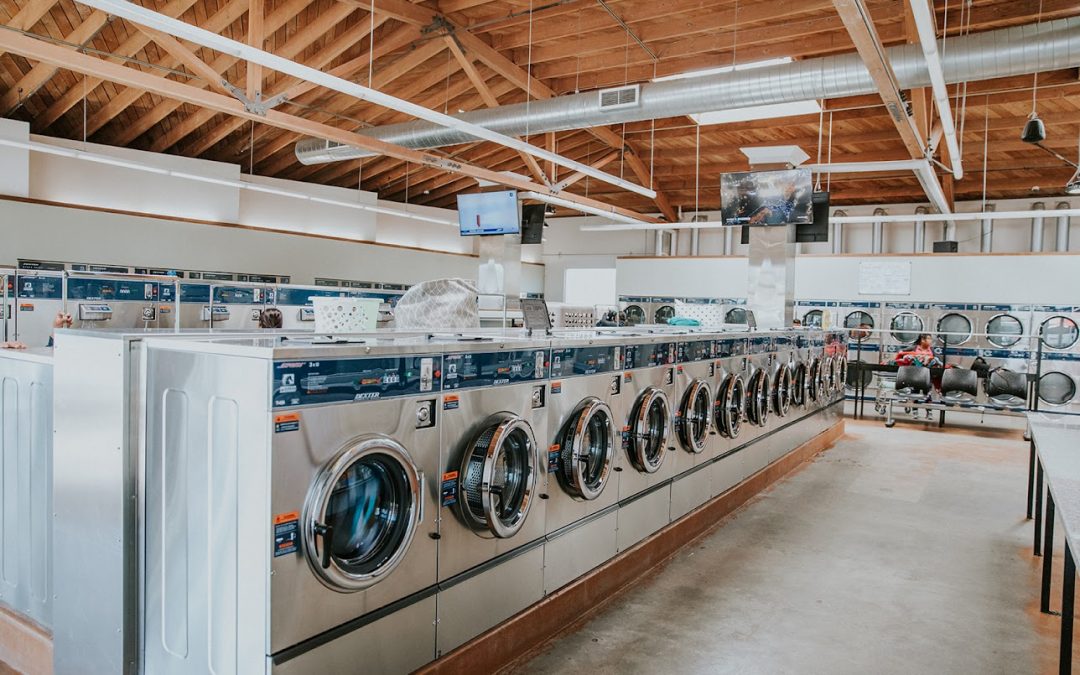 Periodically, we revisit laundromat success stories we’ve published in the past to share compelling new details. Here’s an interesting follow-up story about Neighborhood Laundry in Santa Maria, CA. which made a splash when it opened in 2018.

This is the second laundromat developed by David and David Stewart, a father-and-son team. They opened their first a few years prior in a nearby town.

Neighborhood Laundry gained notice when it opened because it included a 400 sq. ft. two-story indoor playground, in addition to a full complement of state-of-the-art Dexter Laundry equipment and amenities. The playground is complete with a climbing wall, tubular slide, and other popular fun features for kids.

The play space is securely contained and separated from the main part of the laundry but is completely visible through a glass wall. There is a long counter installed along the wall on the laundromat side so parents can keep an eye on their children while folding their laundry.

The Stewarts learned from their experience with their first laundromat that, as proprietors of an important community space, it’s advantageous to keep children productively occupied while their parents do the laundry. And indeed it has been: for both the Stewarts and the community. In fact, the laundromat has proven to be such a popular destination, the Stewarts expanded it significantly recently, taking over the other, unoccupied half of the 7200 sq. ft. building they own.

Stewart-the-son explained why they decided to take the plunge and add the extra space:

“Our store became so popular, it was always busy, particularly on weekends when customers sometimes had to wait for machines. We did some calculations and realized we could cover the cost of expansion if we only increased business by 10% — we knew that was a reasonable threshold which made the expansion a no-brainer.”

The Stewarts equipped the expanded space with additional Dexter Laundry commercial washers and dryers, with emphasis on large capacity models which their customers love. They added a number of Dexter 50 lb. Stack Dryers, including the increasingly popular reversing model which customers love, particularly for bed linens, comforters and blankets. The store is currently equipped with a total of 120 Dexter Laundry machines. That’s a lot of washing and drying capacity!

WSD Laundry Specialist, Michael Ambrose, has worked with the Stewarts for many years and, among other things, has provided expert guidance on optimum laundry equipment size and mix to keep customers coming back and to generate maximum ROI.

In addition to being wonderfully functional, Neighborhood Laundry is also very attractive, welcoming, and comfortable — inside and out. The spacious interior features high, wood-beamed ceilings, attractive flooring, and excellent lighting augmented by the front wall of windows. As a brilliant added touch, the Stewarts designed the front outdoor space to be an extension of the store. The front ‘patio’ features attractive and comfortable wrought iron tables and chairs with umbrellas among beautiful landscaping — just like you would find at your favorite café.

The new space opened in late winter, and as of a few months later, the laundromat is, once again, fully utilized during busy periods. Stewart attributes much of the store’s success to their fabulous manager who’s not only extremely capable and attentive, but also energetic and upbeat — which has a wonderful effect on customers. She contributes greatly to the store’s warm and welcoming atmosphere.

Judging from the online reviews, customers LOVE their Neighborhood Laundry. Among the common feedback about which the Stewarts are most proud is how welcoming and inclusive the store feels. The clientele reflects the local community which is very diverse. Even the music playing in the store is an eclectic mix — there’s always something to please everyone. Now, that’s how to run a laundromat: offer something for everyone and do it right.

Contact a WSD Laundry Specialist today to discuss ways to make your vended laundry stand out from the competition.